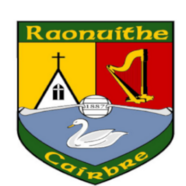 Published: about 1 month ago

Carbery Ranger's U15 Footballers fantastic run in this year's Championship came to an end on Wednesday last in Cloughduv.

Both teams had to contend with the elements, Rangers having them at their back in the first half. At half time they led 0-08 to 0-03.

In the second half Kinsale got a goal which was the difference between the teams at the final whistle.

This young bunch & their Management can be very proud of their achievements, West Cork Div 1 Championship & League Winners.